Ways of Seeing at BRP 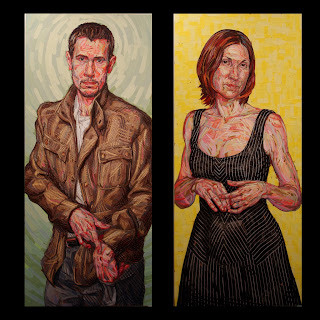 Black Rat Press is delighted to invite you to our next exhibition ‘Ways of Seeing’. The show features works by Swoon, Matt Small and Brian Adam Douglas and explores the different approaches of these three contemporaries to figurative mark making.

Brian Adam Douglas is a Brooklyn based artist who for the past five years has been pasting up his distinctive woodcuts in cities all over the world under the name Elbow-Toe. His work is often grounded in myth, symbolism and poetry and his distinctive style has gained him an avid following of enthusiasts both within street art and the wider art world. Douglas is one of a group of classically trained New York based artists who have chosen the street as the primary place to exhibit their work, finding the immediacy of doing so more liberating than the confines of the traditional gallery system. For ‘Ways of Seeing’ Douglas has created a series of collages portraits. These intricate collages at first glance might be mistaken for paintings given that they have a fluidity rarely seen in collages. Whilst his work has a very definitely unique style it draws on a rich history of figurative painting and has qualities reminiscent of Freud and Bacon.

Swoon is a Brooklyn based artist whose life sized woodcuts can be found on walls in various states of beautiful decay in cities around the world. The scope, variety and ambition of Swoons projects in hugely impressive. Recent projects have involved ‘Swimming Cities of Switchback Sea’, her second solo show with Deitch Projects in New York and her ongoing work with the Braddock Active Arts Project. The Swimming Cities project included seven boats designed and built by Swoon and her crew from discarded materials found in New York dumpsters and then sailed down the Hudson river for 3 weeks stopping along the way to give performances at various locations. The Braddock project is an experiment in inclusive living in the town of Braddock where through creativity and community projects a group of artists led by Swoon hope to revitalize a town struggling with the issues left by the failure of local industry. Swoons gallery installations in which she creates imaginary cityscapes from discarded materials which are inhabited by her life sized figurative wood block prints have gained critical acclaim. Her work is in the permanent collections of a number of public institutions including MOMA, the Brooklyn Museum and the Tate.

Matt Small is an artist whose painting is best understood as an extension of his beliefs and world view. Matt is a passionate believer in social inclusion and that, given the opportunities to be heard and respected, all individuals have something of value to contribute to society. The subject matter of Matts portraits tends to be the marginalized and voiceless in society, those who are socially excluded and often viewed as statistics or pawns in a wider political game as opposed to individuals with the latent potential to contribute and enrich society if only given the opportunity to be heard. By painting portraits of individuals on the outskirts of society, often young black men, Matt encourages us to spend time with people who we may chose to overlook in our daily lives and in doing so forces us to challenge our prejudices and recognize our shared humanity Not content with dealing with such issues only on a conceptual level through his painting, Matt is actively involved in working with the socially excluded. His most recent project ‘Hope in Life’ involved running a series of workshops where mentally ill, homeless and educationally excluded young people came together on a weekly basis alongside established artists to express themselves through painting and music. The project was a huge success culminating in an exhibition at Black Rat Press. The money raised at the show will help make ‘Hope in Life’ an annual project. Matt Small graduated from the Royal College of Art and his unique style of portraiture has gained him a huge following and widespread critical acclaim. He was runner up in the BP portrait award and his work is in numerous collections worldwide including the Victoria and Albert Museum.

Ways of Seeing opens on the evening of July 2nd and invites will be sent out via email to those on the mailing list.