To Fall From Grace 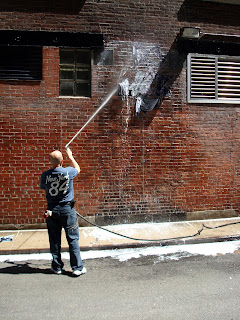 I was fortunate enough to recently be interviewed for a Brazilian show dealing with the New York art scene. As part of the interview they wanted to go with me as I installed a piece. I visited a spot that I have been thinking about for quite some time, years in fact where I used to ride my bike and rollerblade. What was particularly meaningful about this location was that it fit the needs exactly for a more developed installation of work that I created over the past year. In particular there was a security light that I have been looking for for a while to install the Icarus piece against. The install went quite well, and I was very happy with the overall composition. We went and had lunch, toasted with a beer and came back only to witness the death of the installation.
I have never had the opportunity to be witness to the demise of one of my works. I found it quite breathtaking. I can not say I was bummed, the wall was very nice and clean, and I had the feeling it would not last long. But it was just wild to see the entire life cycle compressed in such a short time. The best part is that the folks interviewing me went up to the maintainence guy and began to start questioning his actions.
Posted by ELBOW-TOE at 12:28 PM

I would like to thank you as i just received the sketch a sleeping man I bought from anonymous. very nice piece.

As I read through your post, I said to myself "wow" when I got to the part about the man destroying your piece.
You responded in another post in regards to someone altering your art "it is what it is." In some ways this is the same I guess. You see your work as not necessarily meant to be forever, unless it some how misses the hand of destruction either by the elements or someone else doing something to it. But I still can't feel a little sick about it all. The work is beautiful, takes time to constuct,is well thought out, has purpose, so to see it junked, well like I said it makes me a little sick inside. You have the right attitude, I guess the only kind of attitude one could have when dealing with the unknown.

Ah, the piece is beautiful.